So my ardent 24 year old boy will not give up.  Mind you we have never met.  We had phone sex once and he doesn't want it to end.  He wants to love me, be with me, be my boyfriend.  He is a great deal younger than me.  He ends his sentences in prepositions and when I tell him not to, he asks me 'What's a preposition?'  He is sweet, aggressive and naive.  But he is far too young for me to even consider for more than just sex but even that seems so very wrong.  But this boy is determined.  He says he can make me happy.  I am not buying it.  I tell him that.  I tell him he needs to find someone his own age.  He says he only wants me.  He promises he can please me and he is determined to prove it.  And how will he prove it if I have not met him?  Why of course...he will send me a picture of his penis.

Now, why?  Why would anyone send a complete stranger a picture of their penis?  Now granted his face wasn't in the picture but still, it seems awfully reckless.  You never know where that picture is going to end up or who is going to see it.  And then there was the picture itself.  This was my first penis picture sent directly to me, so it is hard to compare it to other penis pictures.  Obviously I needed help in analyzing whether this penis was worthy of my time.  So I forwarded it to some girlfriends.

The first issue was that in the picture my 24 year old boy is holding the penis erect with his hand.  Why does he have to hold it erect? Shouldn't that thing stand up on its own?  He is after all only 24.   And there is nothing around it for reference.  Friend one suggested I write back and ask for another picture with a ruler next to the penis so we could really get a size perspective.  Not a bad idea.  My other girlfriend pointed out that it was oddly shaped.  Narrow at the base and wider on top.    And yet another girlfriend looked beyond the penis and noted that it looked like my boy was on a futon.  A futon!  That is almost worse than the fact that his penis is unable to stand up on its own.   And then there was the issue that in reality, no penis is a good looking item.  They are veiny, angry looking objects and in the low light my boy chose, it is grey and miserable.

What is my expected reaction to such a photo being sent to me?  Am I supposed to call him and tell him to come right over and put that ugly thing in me?  Or should I tell him how turned on I am by his totally gross gesture?  I am not sure of the penis picture protocol.  Since I am penis picture virgin I have no way of knowing what is the right thing to say.  What I really want to do is call him up and tell him that he should not being sending out pictures of his body parts to strange older women.  But I am pretty sure he is not looking for motherly advice.  So after much debate I decide to go with the naughty older woman role.  I write back to him and tell him he is a bad boy.  I sort of feel dirty.  And not in a good way.

But I did cross another item off things I have never done.  Never had phone sex - check.  Never had a guys send me a picture of his penis - check.  What could possibly be next?  I am sort of afraid to find out.  But so far none of these new experiences have damaged me emotionally.  So I guess I will continue to keep the door open and see what walks through, no matter how gross looking it is.  Because after all, I am 43 and single.
Posted by The Divorced Dating Experiment at 8:23 AM No comments:

So it happened.  No, not that...get your mind out of the gutter.  I was hit on by a woman.  And not just any woman.  A fifty year old bisexual with HUGE fake boobs.  She told me I was so pretty and would love to get to know me and see if she could convert me.  She isn't unattractive and as well as my dating life has gone, I have sometimes wondered wouldn't it just be easier with a woman?  Would she have the same irrational insecurities as me?  Would she understand that I need definitive plans and not just a passing reference to getting together?  Would she know when she needed to call or text just to say hi, so I wouldn't wonder if she was over me?  I don't know.  But it is something to think about.

Sadly though, I don't think I can go there.  As persuasive as my female admirer is, she is just missing some parts I need and has too much in other areas that don't interest me.  But how nice to realize I am attractive to more than just twenty four year old men and deranged lunatics.

And just to satisfy your curiosity.  Here she is. 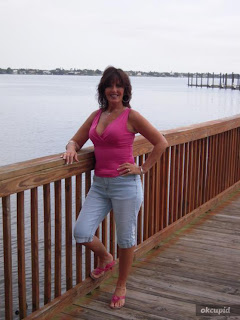 Posted by The Divorced Dating Experiment at 5:33 PM No comments:

Phone sex and the younger man

So I have never had phone sex.  There I said it.  I am 43 and I never had phone sex.  I think it is because I assumed I would laugh and laugh instead of putting on my sexy, sultry voice and getting into the action.  It just seemed like one of those things that was going to be awkward, uncomfortable and all together weird. But this is the new me.  The me that is going to experience all life has to offer.  Even if I have to suppress my laughter to get through it.  But who would my poor test guinea pig be and would he be able to play along.  It would have to be someone I would never, ever see in person.  Someone I would never consider to be a potential date.  Someone, someone....someone much younger.  And there he is.

Twenty four years old and hitting on me.  Am I flattered?  Nah, not really.  I am actually a little creeped out.  Why would a twenty four year old hit on me?  What does he have to gain?  I asked him.  He told me he was looking for sex with a mature woman.  Mature?????   Isn't that just another way to say old?  I am almost ready to shut this down.  But no, for the sake of science, I will muster on.  I pretend to be very interested in this child and what he does.  I ask him why he thinks I would want to be with a twenty four year old rather than someone closer to my own age.  He claims he comes with no baggage.  Oh, baby, I say, everyone has baggage, it just matters whether it is carry on or has to be checked.  And clearly this boy has some Mommy issues.  He also claims he can please me sexually like no other man.

Now think back to when you were twenty four.  What kind of sexual experience had you had.  Even if you started having sex young, really, what is it you knew about sex?  And if you are a twenty four year old boy, really what is your end goal?  Is it to make sure your lady companion is completely satisfied?  I am thinking no.  Now yes, I am generalizing, there are very mature twenty four year old boys out there.  I am just noticing that this guy is not one of them.  But I play on.  I tell him I want him to take control.  I want him to be in charge. He claims he is up to the task at hand.  I tell him I will call him the next evening.

The next evening arrives.  I am not sure I can do this.  I am already having a hard time holding back the giggles.  My boy emails me with his phone number.  I email him back telling him I want no small talk - I need him to jump right into action.  I worry if he actually starts talking to me I will lose it.  I block my phone number, dial his and sit back.  What to expect?  How will this go?  Will I have to say things?  Will I have to be serious?  And then he is there.

Hi baby - is what he says to me.  Ok, here we go.  I say hi back.  And then we begin.  He asks me if I am lying naked in bed.  I lie and say I am.  Honestly, I am sitting fully clothed on my couch, tv muted, '30 Rock' playing in the background.  He then launches into what he thinks is his best material.  It involves squeezing parts of my body and rubbing others.  I yawn.  Then I remember, he is only twenty four.  I need to help this boy out.  I tell him what I want.  He pauses, silenced by my forthrightness.  But then he starts up again.  He is getting better.  But I am doing too much work here, coaxing him to say the right things.  Then he tells me I am a good girl.  I am his good girl.  From a man of a certain age, success and authority this line may work.  But from a boy young enough to be my son, this is making me laugh.  I swallow the giggle and tell him he is making me hot.  He continues to describe what he wants to do to/with me.  It starts to get redundant.  We get to what I tell him is the end.  '30 Rock' is over, so I tell him  his work is done.  He wants to know if he satisfied me.  Oh yes, I lie.  He was the best phone sex I have ever had.

And then he wants to talk.  About me.  He wants to know my name.  He doesn't know my name!  For some reason I find that hilarious.  I tell him we should just keep this focused on the task at hand.  He seems sad about that.  My poor little boy.  He wants to meet me.  He wants to  know if I have roommates.  Oh twenty four year old, you are so cute.  Roommates.  That makes me laugh out loud.  He asks if I will call him again.  I tell him I will have to think about it. My boy tells me he knows he could make me happy.  I tell him he already made me so happy but now, as I am very old, I must go to bed.  He says sadly says goodnight.

So phone sex....could be fun but perhaps for me it takes a man of a certain age, experience and authority to pull it off.  Younger men......nah.  It is just far too much work to make them into the men they need to be.  They are so eager, so naive and so inexperienced.  My boy meant well but the fact that I had to tell him what to say means that really I could have just sat on my couch and talked dirty to myself.  Which also would have made me laugh.  Will I have phone sex again?  Absolutely.  Will I have it with a much younger man, I think not.  While I was flattered to be contacted by such a young boy, I am not really interested in someone who wasn't born when I graduated from high school.  I need a man who  experienced the 80's not just learned about it through 'Hot Tub Time Machine'.  Phone sex, yes.  Phone sex with a boy, no.  Because after all I am 43 and single.
Posted by The Divorced Dating Experiment at 9:26 AM No comments:

Promote Your Page Too